How Does An Ice Maker Work?

Before automatic ice makers, ice had to be made manually by pouring water into a mold and placing it in the freezer.  The ice maker installed in your freezer produces ice using that same process, but the process has been automated. 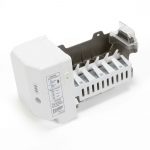 Once the ice maker has been connected to a power and water source (aka the plumbing line connected to the back of your refrigerator), the ice maker cycle should begin automatically. At the beginning of the cycle, an electrical signal is sent to a water valve to fill the ice mold with water. Then, the freezer goes to work freezing the water. A signal is sent to halt that process when an internal thermostat indicates the cubes have reached 5-9 degrees Fahrenheit.

After the cubes have been created, a heating coil is activated to loosen them from the molds. The ice maker’s ejector blades are then used to push them out of the molds and are funneled into the collection tray. A shaft separates the tray from the dispenser at the front of the unit, which is opened when the lever or button (depending on the model) is pushed down. This cycle will continue until the shut-off arm installed at the front of the ice maker sends a signal that the ice cubes are stacked to its capacity.

This is quite a complicated process with many interdependent steps, meaning that a failed ice maker can be caused by any number of broken mechanisms.

Why Is My Ice Maker Not Working?

There are several common reasons why an ice maker is not working properly, with some fixes simpler than others. It’s possible that the ice maker shut off arm is defective or has accidentally been turned off. A faulty ice maker thermostat could also cause ice production to stop, as the water valve won’t be released if the temperature isn’t in its proper range. A more complex issue could involve the ice maker motor that sets the cycle into motion.

Common reasons why your ice maker may not be working: