GE has been doing a great job promoting its new French Door Refrigerator with Hot Water Dispenser across the Internet. On the day of this post, a quick Google search revealed more than 18,000 indexed results (all within less than 30 days!) for the keyword “French Door Refrigerator with Hot Water Dispenser.” But, despite the hype, how does the refrigeration unit really stand up to comparable models?

In April 2013, General Electric announced the release of their newest French Door Refrigerator, which boasts the first ever hot water dispenser. This new feature is capable of dispensing up to 10oz of hot water in a single use. The hot water dispenser functions much like its cold water counterpart, but has a touch screen control panel that enables the user to select from various preset hot water temperatures; the settings include a 185º soups setting, 170º tea setting, 150º hot cocoa setting, and a 90º warm setting. Users with specific needs can customize the temperature settings using the touch screen control panel.

According to GE Appliance’s lead design engineer, Rob Lewis, “With the GE Café’s hot water dispenser, there’s confidence in getting an accurate temperature every time.” He continues, “The feature will be especially interesting for tea aficionados who can make the most of their tea experiences.” Other GE suggested uses include warming water for baby formula and preparing oatmeal. John Boyd, the marketing manager for GE Appliance refrigeration products, says, “The hot water dispenser will be a feature that once consumers have it, they’ll never want to live without it.” However, with a price tag of around $500-$1000 more than a comparable GE French Door Refrigerator, we had to wonder if the warm water dispenser was worth the extra cost.

According to a Consumer Reports study testing features such as ease of use, energy efficiency, noise, and temperature performance, the overall score of the GE Café was very good at 78 points. The GE Café received an Excellent in temperature performance, and Very Good for energy performance, noise, and ease of use. Plus, Consumer Reports added that there were “[no] indiscernible flaws in performance.” Although the GE product line has a relatively low overall brand reliability score, it appears that the GE Café series may prove to stand up to the competition.

Some of the most notable, and desirable, features of this unit include: 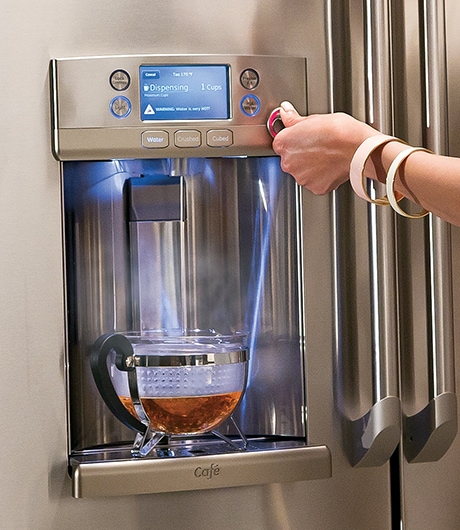 So, “Is the water dispenser worth the extra cost?” It depends. If the hot water dispenser is a feature that you would use frequently, than the GE Café would be a good purchase. The unit is relatively inexpensive, and still offers multiple features that sets it apart from other low end units. On the other hand, if you don’t see yourself needing 10oz of hot water at your fingertips, you may consider a cheaper model.

Leave us a comment and let us know what you think about the GE Café Refrigerator’s Hot Water Dispenser, and as always, if you need GE repair, give us a call.